A Weekend of Grilling and Graduation Parties

Besides delivering the main course for Saturday afternoon's graduation party for my nephew Gus, who graduated from Kennessaw Mountain High School this weekend, I was also called upon for some impromptu grilling on my brother-in-law's propane grill (a definite rarity for me).
﻿
﻿ 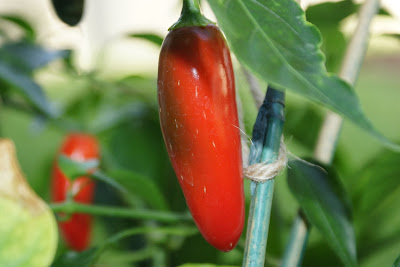 Here's a picture of a serrano pepper growing in my backyard.

A couple of years ago I started above ground gardening and after several trials and many errors, I've been successful in growing several pepper varieties in a simple, but very effective, hydropinc bubbler constructed from an inexpensive 18 gallon plastic tote.

At my house, we eat lots of green and orange bell peppers, cubanelles, poblanos and even some jalapenos now and then.  But the serrrano is a little out of my league. It's quite a bit higher up the Scoville heat scale than anything I could eat fresh from the garden.  When I purchased the seeds, I didn't pay much attention to the potential mouth scorching qualities of a "hot" pepper, but luckily I did a little research before plopping on in my mouth.

Fortunately for me, one of my co-workers loves to make salsas. She took a batch of the serranos last week and made a batch of very tasty salsa that went well with a bag of Tostitos.

If you like hot bbq sauce, maybe you should consider growing your own hot peppers too. I can help if you're interested in building a cheap and easy hydropnic bubbler, but if you prefer the traditional gardening route, Gardenersnet.com has a nice article you might find helpful.

Funny story....I was making ABT's last year from jalapenos and decided to casually munch on one while I was cleaning up.  Apparently someone put a green serrano pepper in the bin where the jalapenos were being stored at Publix. Ohhhcheewowow!! I grabbed ice cubes, milk, water and any other liquid I could get my hands on quickly.
Posted by The BBQ Guy at 7:57 PM 3 comments:

I pulled the pork butts from the cooker around 4:30 p.m. 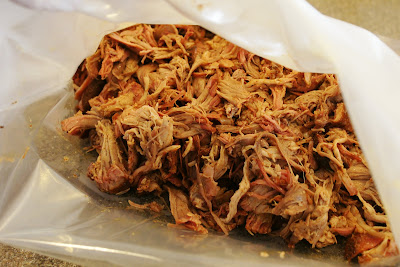 This pork is being served at my nephew's graduation party next weekend, so after pulling and seasoning I placed the ready-to-serve pulled pork in a vacuum sealer bag. 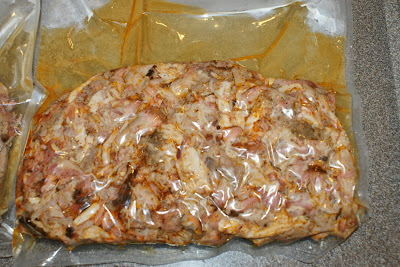 I've been vacuum sealing and then freezing my leftover bbq for almost 7 years. It's great for storing leftovers and extras and just happens to work perfectly for pre-cooking 'que for family events.  Caterers and restuarants do it too!

Tip:  Take special care to make sure the plastic is laying flat on the sealer bar so it's not krinkled.  A krinkled bag might come open unexpectedly and cause freezer burn.
Posted by The BBQ Guy at 9:29 PM 2 comments:

﻿﻿﻿
﻿﻿﻿Here are a couple of low resolution pictures I took of my current bbq cook this morning.

The baby backs are not very clear because of the smoke rolling out when I opened the door. The cell phone lens fogged up too apparently, with the change in temperature.

For the pork butts I'm trying a couple of different commercial rubs.  I am using the Oak Ridge BBQ Beef and Pork rub straight out of the container, but for the Bad Byron's Butt Rub, I added some additional brown sugar and turbinado sugar to take some of the sting out of the rub and balance out the saltiness.
﻿﻿
Before I get any of the Bad Byron's fans that may be reading this too riled up, I should explain.  I'm a big fan of the philosophy - "if it ain't broke, don't fix it."  ﻿﻿I've used Bad Byron's Butt Rub on my pulled pork for years, but I've noticed that some of my relatives favor a little less bite in their bbq. Sometimes that particular commercial rub tastes a little "peppery" and it has a strong salt flavor. After all, cooking bbq is a lot about knowing the audience that's going to be eating it.
Posted by The BBQ Guy at 11:06 AM 3 comments:

After a night out enjoying the Florida Top Gun Sprints and Florida Mini Sprints at the local dirt track, I got up early to prepare the baby backs and pork butts for my nephew's graduation in Kennesaw next Saturday.

I started th fire, filled the water pan, added hickory chunks for smoke seasoning, and put the meat in the smoker. I set the time on my microwave for 99 minutes so remind me to check on the cooker later on.

I checked back about 30 minutes later and, to my surprise, the fire had gone out on the cooker. Completely!

I've got it back under control now, but I just added about an hour to my cooking. :-(
Posted by The BBQ Guy at 8:56 AM No comments:

"This is your mission, if you choose to accept it."

Misson:  Provide barbecued baby back ribs and pulled pork for up to 30 people.

Time:  Lupper (Lunch + Supper) will be served promptly at approximately 3 p.m. (give or take an hour)

Potential Threats:  BBQ could prove popular with guests. Evasive action may be required if quantities for seconds and thirds are not readily available. Prepare for this scenario by offering well-thought-out and believable explanations (aka "stories").
Posted by The BBQ Guy at 10:26 PM No comments: