What do you do in Florida when it's cold and rainy on a Saturday morning?  This morning we decided to make the drive from Riverview to Hyde Park near downtown Tampa and eat at Smoke Barbeque and Grill. 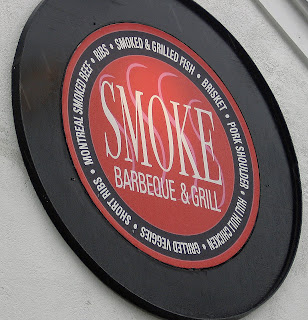 On the trip over we listened to tunes by B.B. King and R.J. Spangler to get in the appropriate mood for some 'que. After circling the block three or four times we abandoned the idea of parking in actual restaurant parking lot, but we did find a "spill over" lot down the street. 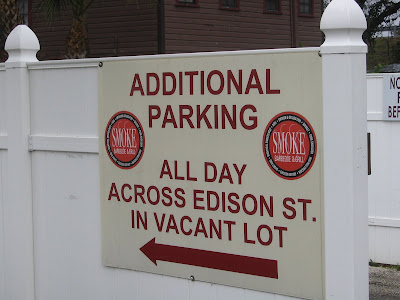 We settled into a booth and were presented with breakfast menus.  Since it was nearing 11:00 a.m., we asked for lunch menus, but the waitress explained that the bbq lunch we were hoping for wouldn't be available until noon.

I'm not a breakfast eater.  When I do eat breakfast it's usually a bowl of organic oatmeal, but after making the 30 minute drive and paying $2.50 in tolls (and $2.00 going back), we decided to give breakfast a try.

Linda ordered an everything omlette with home fries. 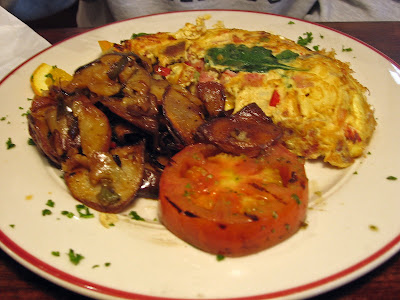 I settled for brisket hash. 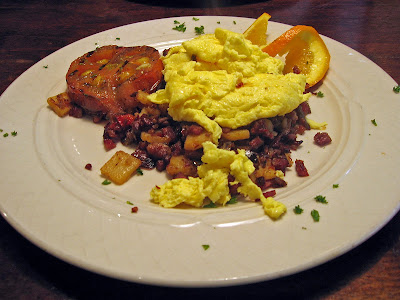 It was a nice breakfast - truth be told - but I hope to make the trip again when they are offering more traditional barbecue items. I won't say I disliked the experience, but as you can probably tell from the tone of this post - I left dissapointed.
Posted by The BBQ Guy at 12:56 PM 5 comments:

What does CRAB-BQ mean to you?

Hi, this is The BBQ Guy’s wife and I am honored to be asked to write a blurb about our recent trip to a new restaurant. Last week in the Tampa Bay Times I saw an ad for “Crab-bq” a restaurant in St. Petersburg. I loved the name and envisioned a varied menu of smoked seafood and traditional barbecue fare. The BBQ Guy said he took the name to be seafood and bbq. Off we went Saturday to see who was correct. My mouth was watering at the thought of eating some new smoked seafood delicacy and The BBQ Guy skeptically went along for the ride.

The trusty GPS got us to the restaurant. We arrived around 11:30 a.m. to an empty restaurant and were greeted by a very personable hostess/waitress. Although there was no BBQ feel to the restaurant, it was clean and neat and did have a nice outdoor seating area (we didn’t use this because it was 55 degrees here in Florida).

The server brought us our menus and took our drink orders. Well, our BBQ Blogger was correct. The menu was low on BBQ and heavy on traditional seafood fare. So away went my dreams of new exotic smoked seafood. Brian did like the idea of the Pulled Pork Sliders and I decided on half rack of ribs.

Boy did my eyes pop when I saw 4 untrimmed pork spare ribs arrive in front of me. I was reminded of our first BBQ contest when The BBQ Guy didn’t know any better and had not trimmed his spares. I ordered them dry with the sauce on the side. They were tender, but a bit awkward because of their size and bones. (They looked nothing like the rib picture on the restaurant’s website.) I was not all that fond of the flavor without some bbq sauce. I would definitely recommend having the sauce served heavy on them. My baked beans side item was not very warm, but it tasted fine. The bbq sandwich slider idea is still a really good idea, but they were served with cold meat on a toasted bun and The BBQ Guy didn’t really like that. His steak fries were delicious though!! He had to slap my hands away from them on several occasions.

Neither of us tried seafood, but I did hear 2 couples that came in after us comment on the chowder and I believe the waitress said it was made fresh there in the restaurant.

As a BBQ restaurant I have to give this a C-. Cleanliness of the dining area and bathrooms A+. Service an A- (our waitress was very sweet, but she never offered to refill our drink). I don’t think we will make a special trip over to St. Pete again for this restaurant, but would probably give it one more try if we were in the area - but we would definitely order seafood and not bbq.

Thanks to my hubby for letting me have a voice!!
Posted by The BBQ Guy at 5:15 PM 5 comments:

Email ThisBlogThis!Share to TwitterShare to FacebookShare to Pinterest
Labels: CRAB-BQ

BBQ Ribs for the Superbowl

I cooked two racks of babybacks and a rack of spare ribs for the Superbowl.  The Hen and Hog rub from Spicewine Ironworks was very good.  If you live in Missouri, you can get that rub from Hy Vee grocery stores. You can also order some from their website.
Posted by The BBQ Guy at 7:22 PM 12 comments:

Email ThisBlogThis!Share to TwitterShare to FacebookShare to Pinterest
Labels: baby back ribs, bbq, how to bbq

I ate at Martin's BBQ in Nolensville, TN a couple of years ago and follow Pat on the restaurant's blog. When he found out who I was, he was very gracious and gave me the "behind the scenes grand tour". It's always nice to meet people in person that I read about on the Internet regularly. Pat has written extensively about his experiences of starting this popular bbq restaurant from scratch.

I ran across a video tonight that documents Martin's visit to the Big Apple Block Party. I hope you enjoy it. 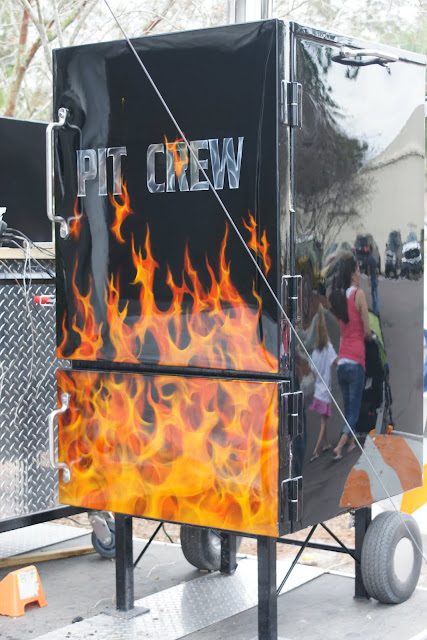 This one of the best paint jobs I've ever seen on a bbq smoker. I absolutely love it. This picture definitely does not do it justice. Did you notice the reflection in the paint on the right hand side?
Posted by The BBQ Guy at 2:24 PM 4 comments:

Email ThisBlogThis!Share to TwitterShare to FacebookShare to Pinterest
Labels: bbq

Yes We Que Team of the Year

You've heard of the KCBS Team of the Year, Memphis Barbecue Network TOTY, and are probably familar with the Florida BBQ Association TOTY, but.....what about the Yes We Que Team of the Year?  Wild Blue, 4 Men and a Pig, and The Slabs finished 1, 2, 3, in the standings finishing ahead of some other fantastic barbecue competitors.  This innovative marketing campaign appears to be the brain child of Jeff Stehney proprietor of The Kansas City BBQ Store and purveyor of some of the most popular bbq sauces and spices in the bbq business.

I think this type of marketing campaign has tremendous possibilities for the bbq industry. I hope some other bbq businesses will implement similar programs in the future.
Posted by The BBQ Guy at 9:36 AM No comments:

Email ThisBlogThis!Share to TwitterShare to FacebookShare to Pinterest
Labels: Yes We Que

So I'm sitting here watching Dateline tonight and picked up my laptop to check my e-mail. I finished that and just couldn't resist checking out The BBQ Forum. I scrolled through some postings and learned that Johnny Trigg now owns a computer and even has an e-mail address. I also ran across an interesting recipe from Dr. BBQ. Check out the video below:


Bacon Brie Recipe from FireCooker on Vimeo.
Posted by The BBQ Guy at 10:04 PM No comments:

Don't forget to watch the season finale of BBQ Pitmasters on TLC tomorrow night at 10 p.m. eastern time.  I have a feeling you'll be seeing a second season of this show, but why chance it....get your bbq TV fix while you still can!
Posted by The BBQ Guy at 10:40 PM 2 comments:

BBQ Question of the Day

Have you ever wondered how bbq competitors are able to cook 4 meats on one cooker and have it all finished in a 2 hour turn-in window?

The pork butt and brisket are the easy part. You can start them cooking about 10 p.m. on Friday, cook them to 165 degrees and wrap them in a double thickness of aluminum foil.  They'll be finished by 8 a.m. and you can store them in an Igloo cooler lined with several towels until it's time to turn them in. They'll still be very hot (170 degrees or so). The bigger cuts of meat are much more forgiving.

Chicken and ribs would go one in the morning and come off last - just prior to turn in time.  For me, the chicken and ribs are the key. If you can get them near perfect, you will have a big advantage.
Posted by The BBQ Guy at 7:24 PM No comments:


This movie clip attempts to provide some insight for preparing an untrimmed packer brisket for seasoning and cooking. I use a Weber Smokey Mountain (WSM), but this prep method will work for Klose, Lang, Jambo, Backwoods, Stumps, Superior Smokers, etc. I freely admit that everyone outside of a true bbq afficianado will probably find it very boring (actually they might think it's boring too), but it is what it is - bbq. And if you don't already own a Jaccard go buy yourself one. Your brisket will thank you for it.

Too funny. I'm sorry I missed these guys last year.