A lot of new bbq contest competitors are amazed at some of the RV's used by more experienced teams. (I know I sure was back in 2001.)

I've always dreamed of owning an American Eagle or American Tradition manufactured by Fleetwood RV's American Coach luxury division. I'd even settle for a Holiday Rambler Ambassador. But just like in 2001, I don't have the serious coinage it requires to own a new one because a new one ranges in price from $225,000 - $500,000 and maybe even a little more depending on the exact options chosen.

I suspect I'm like most "average folks". When I daydream about things that are out of my personal economic reach, price is no object. Daydreams are free, right? Who would even think about checking into a used one? Well, it turns out there are a lot of very nice used motor coaches on the market right now.

Here are a few examples:

If you really get serious about looking, there are many, many other examples ranging in price from $19,900 to roughly $39,000 are available. The chassis used for many of these Class A coaches (Freightliner, Spartan, or Roadmaster) are designed to last for 1,000,000 miles, so the owners most likely wear out before the coaches do. Many of these coaches have Detroit Diesel, Catepillar, or Cummins Diesel engines that have been recently rebuilt and have proven themselves for decades of RV use.

Email ThisBlogThis!Share to TwitterShare to FacebookShare to Pinterest
Labels: RV

With temperatures falling into the lower 40's, we're beginning to crave chili on the weekends. Linda usually cooks up 2 gallons or so for lunch and we eat leftovers all week long. Her basic recipe includes a little bit of this and little bit of that with some ground beef, garbanzo beans, chick peas, black beans, kidney beans, chopped onion and some diced tomatoes.

Earlier this month, I purchased a chili mix from HappyTrailsChili.com hoping to get some ideas about how chili spices are supposed to taste from the perspective of a world champion chili cook.  The Happy Trails! Chili Seasoning Mix is marketed by Tom Hoover, a very successful ICS chili competitor and businessman. Tonight we decided to try it out. 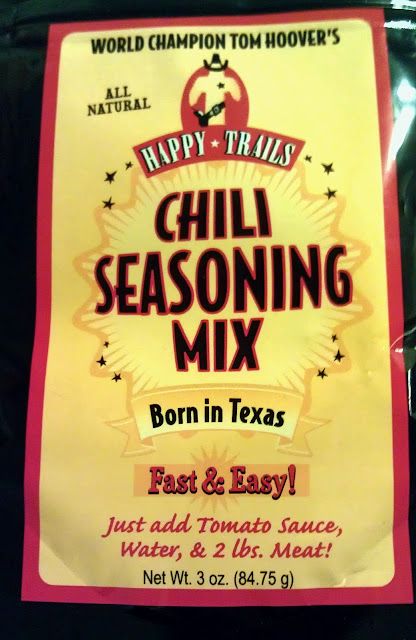 I followed the recipe directions on the back of the package:
I brought it to a boil and simmered the chili for 30 minutes prior to serving. 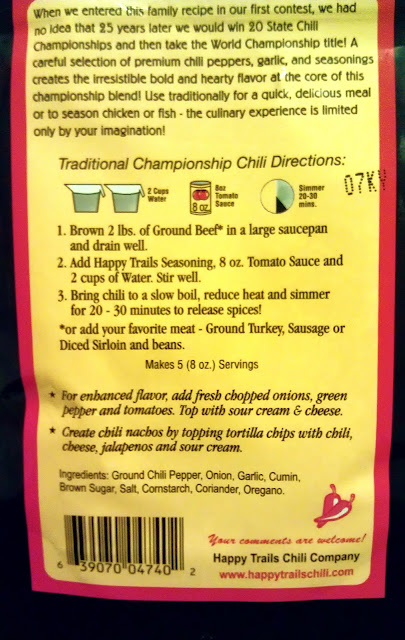 I've got another package﻿ of the mix to experiment with. Next time I'm going to use top sirloin instead of ground beef.  If you want to try some for yourself, you can purchase it at HappyTrailsChili.com.
.

Email ThisBlogThis!Share to TwitterShare to FacebookShare to Pinterest
Labels: chili

This weekend I was in the mood for some complicated bbq.

I pulled out my favorite copy of Peace, Love and Barbecue last night and prepared to cook one of the numerous World Championship bbq recipes that are featured.  Unfortunately, after a quick trip to the pantry for supplies to mix up a pork rub, I soon realized that I was missing a primary ingredient - sugar. (We've been trying to eat a little healthier and I've been using stevia in my iced tea.)

Since it was almost 9 p.m., heading out to the store did not sound too appealing. Sometimes you just have to drop back and punt, so I headed back to the pantry and returned with some leftover Billy Bones spice rub that we purchased at Cabela's.

After a couple of apple juice-mixed-with-honey injections and a quick-but-liberal sprinkling of spice rub, the pork butts were marinating in the refrigerator. There was minimal mess and less fuss compared to mixing up a recipe from scratch.

Keeping with the less-is-more philosophy of the day, I pulled out the Weber Smokey Mountain water smoker this morning instead of rearranging the garage to pull out the custom built insulated upright that works pretty well with temperatures nearing refrigerator levels here in Southeast Michigan. The WSM is nearing it's 11th year birthday, but still works like new. It's a true set it and forget it cooker. Who needs a fancy smancy computer controller? And what good really comes from those my-smoker-is-bigger-and-more-expensive-than-yours models?  Truth be told, I have always gravitated toward using the $189.99 basic black cooker versus the $1,500 custom painted red version of the same basic design for informal personal cooking sessions. 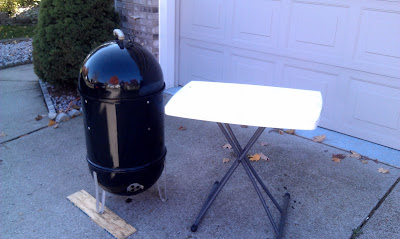 I often think about putting my retirement savings on the back burner for a while and putting my name on the waiting list for a premium offset smoker that's all the rage on the competition circuit these days.

But on days like this while watching the Sunday morning talking heads, reading the newspaper, surfing my favorite bbq websites, catching up on Facebook, and writing a couple of bbq blog posts I remember why I started cooking bbq in the first place. I really enjoy good food cooked the way I like to eat it without having to spend a lot of money.
﻿
﻿In competition I cooked pork butts to 196 degrees and let it rest in a cooler for 4 or 5 hours before turn in time.

I cooked this pork at 225 degrees for roughly 8 hours to an internal temperature of 200 degrees. I have found that when cooking the meat a little longer, it doesn't need to rest quite as long before pulling. These butts rested for 90 minutes and separated easily.

While I had the cooker fired up I decided to ﻿﻿﻿﻿cook some pork ribs too. I purchased these ribs locally from Back Forty Acres in Chelsea, MI. They are untrimmed, but for eating ribs at home it's not always necessary to trim them. Trimming is time consuming and there's also a certain amount of waste that occurs. 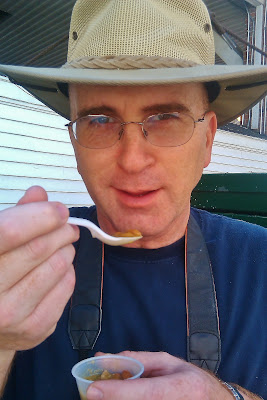 On Sunday we'll be heading to Plymouth, MI to compete in the Great Lakes Regional Chili Cookoff. It's our first attempt at a chili cookoff. I'm not expecting to win, but it's an opportunity to dip my toe into the competitive chili arena. I've attended the event many times and see some similarities with bbq contests sanctioned by FBA and KCBS.

The weather today was raining and cold, but the forecast for tomorrow looks a little warmer with a chance of rain in the morning.

Here's a picture from last year taken while I was sampling some verde chili.

I'm entered in ICS red and ICS verde. My personal tastes gravitate a little more toward the verde than the red, but as a bbq enthusiast I'm used to eating a lot of pork :-)

If you're in Plymouth, or near it, stop by and say hello.

Music to BBQ By - Kings of Leon

I don't typically listen to contemporary artists and bands, but I make an exception for Kings of Leon. After watching a documentary special on Showtime last year about the band, I started listening to them on occasion. Here is my favorite tune they perform.

Have You Read Thin Blue Smoke Yet?

If you are looking for bbq gifts for hard to buy for friends and relatives you can't go wrong with the paperback edition of  Thin Blue Smoke. I read the hard back version cover to cover when it first became available on Amazon.com. But, don't take my word for it - there are currently 38 positive reviews from readers on Amazon.

It sounds like a bbq book and certainly talks alot about Kansas City BBQ, but it offers so much more than that. It's a book about life, about Kansas City, and about forgiveness. I think the chapters that focus on the character Ferguson Glenn could be spun off into a stand alone novel. If a movie were made based on this fictional Episcopal clergyman, I'd be the first in line to purchase a ticket and some popcorn.

Congratulations (again) to Doug Worgul for a fine work. I can't wait for his next novel.
Posted by The BBQ Guy at 7:35 PM No comments:

Music to BBQ By - Dusty Springfield

Dusty in Memphis was a tremendous success. Anchored by one of Springfield's biggest hits, "Son of a Preacher Man," it climbed to No. 10 on the U.S. charts. In 1994 that song received a second round of popularity when it became one of the featured songs in the Quentin Tarantino film Pulp Fiction. Read more...

This one reminds me of Adele.

In case you are wondering, she passed away in 1999 after a battle with cancer.

Looking for ideas to use my current abundant supply of jalapenos I decided to make some "green" chili today. ChiliCookOff.com is the home page for the International Chili Society's (ICS) competition information. In ICS competition, beans are not allowed so my chili would be something a little different than the typical "home-style" chili I'm used to eating this time of year.


My attempt at chili verde was loosely based on Gambler's Chili as published on the ICS website.

1. I started with 2 lbs of pork loin chops purchased at Meijer that I cut up into small 3/8 inch sized pieces. I browned it in skillet with a small amount of olive oil for 10 minutes and then drained the liquid.

2. I added 1/2 a jar of Green Salsa, 2 cups of chicken broth, 1 cup of finely chopped onion, and 1 cup of finely diced green pepper to the pork and continued cooking for 1 hour.

3. I added the spice mix (see below) and continued simmering.


4. Then I added 14 oz of canned chopped green chili's and simmered for another 30 minutes.


For my personal tastes, the results were pretty good. The pork was very tender. Some might like a little more heat or salt, but that's easy to regulate by adding a dash here and there for your preferences. Beans can also be added, if you like your chili "homestyle".

One option for adding some heat using jalapenos is to cut them lengthwise and drying them on the lowest heat setting in the oven. When they are dried out, they can be ground up using a coffee grinder and used as a powder.
Posted by The BBQ Guy at 7:23 PM 1 comment: