I grilled some bison burgers tonight and used Stubb's Charcoal Briquettes.  I've used these briquettes before and have no real complaints.  I think it works better for grilling than low and slow bbq cooking.  It seems to cook quite a bit hotter than the Royal Oak lump or briquettes that I usually use.

By the way, if you've not visited Stubb's home on the World Wide Web, I'd urge you to check it out. I've seen their products in grocery stores for years, but not really taken time to learn the story behind them.  I'm a big Stevie Ray Vaughn fan, so I enjoyed reading about the restaurant "in the beginning".  Pretty interesting for sure.
Posted by The BBQ Guy at 8:27 PM 4 comments: 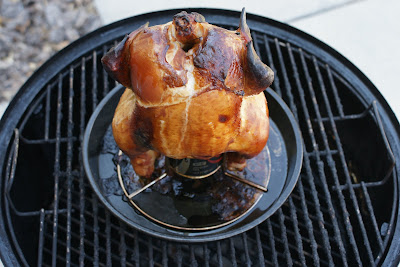 Email ThisBlogThis!Share to TwitterShare to FacebookShare to Pinterest
Labels: bbq chicken, beer can 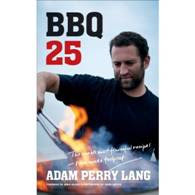 I received the following press release today regarding BBQ 25, a new bbq book.

Grilling master, barbecue chef and best-selling author Adam Perry Lang has spent his career perfecting what he calls “3D Flavor” for the barbecue. Not satisfied with flat boring flavors, Adam has created an effortless method of layering flavors to get extraordinary results from your grill. In his newest book, BBQ 25: The World’s Most Flavorful Now Made Foolproof (HarperStudio, May 11, 2010, $19.99/boardbook) Adam distills his vast knowledge and creates the “25 recipes that you will cook 95 percent of the time” and puts them into a format that’s a first for a cookbook.

His hyper-visual “BBQ survival guide” comes in a wind-proof, easy-to-clean board book built to withstand beer and barbecue sauce spills out at the grill. BBQ 25 is organized by type of meat (beef, pork, lamb, chicken, fish & miscellaneous) and cooking time (quick, medium, long). He begins every chapter with a short list of “Sourcing Tips” and then dives in. Directions are split into “preparation” and “cooking method” and Adam communicates his 3D flavor-building techniques into easy-to-remember phrases including “season like rain,” and “glisten with oil.”In addition, each recipe is illustrated with full-color photographs of the process, a pictorial of the required tools, and ingredient lists for marinades, seasonings, and brines. And every dish can be done in 10 (or less) steps from preparation to table.

Adam takes every opportunity available to build flavor by marinating in advance, basting during and saucing (sometimes right on the resting board) post-grilling. He prefers indirect heat and likes to keep things moving to ensure even cooking. Grilling is an active sport for Adam—and it’s not enough just to marinate OR slather with barbecue sauce. Adam employs both for a superlative result. Take his nine-step recipe for boneless chicken breasts as an example. He begins with a wet marinade of herbs and spices and lemon juice which you “mix and crush with your hands” in a re-sealable bag. After you brine for at least an hour, dry them off and sear them in a cast-iron pan that’s been heating on your grill. While the chicken is cooking in the pan, make a glaze with herbs, honey, olive oil and lemon zest and place into foil pan on the grill. Then start moving. Cook the chicken back and forth between the foil pan and straight on the grill. The flavors build as you cook. When the chicken has finished cooking and rests, boil the glaze down and pour it over the rested breasts for the most flavor infused chicken your guests have ever eaten.

More than half of the recipes in BBQ 25 are “Quick Cook” because as Adam writes in his introduction, “Sometimes all you want is instant gratification. Relax, have fun, embrace simple ingredients and make them into something spectacular. Enjoy the stuff that surrounds you, and cook while having a beer, hanging with your family or watching a game with your friends. You want recipes that are straightforward, easy-to-follow and look really professional, with flavors that blow your mind.” What more is there to say?

ABOUT THE AUTHOR: Adam Perry Lang graduated with distinction from the Culinary Institute of America and cooked at Daniel, Le Cirque, and Restaurant Guy Savoy. Tossing his pursuit of stars for pursuit of flavor, Adam became a pioneer in urban barbecue and opened a “rib shack”, the nationally acclaimed Daisy May’s BBQ U.S.A in New York City. Adam also left the bright lights of New York City kitchens for the competition barbecue circuit and has taken the prizes of Grand Champion honors at the World Pork Expo in Des Moines, Iowa and a First Place victory for his Pork Shoulder at the Kansas City American Royal a.k.a. "The World Series of BBQ". He also serves as meat maestro at Mario Batali’s Las Vegas Italian steakhouse, Carnevino, and is currently partnering with Jamie Oliver in Barbecoa, a restaurant scheduled to open in London in October 2010.

I've been working on a new marinade this weekend.  As a resident of the Tampa Bay area my goal is to embrace some of the local ingredients that are available and develop a unique flavor profile for bbq chicken. Here's a recipe that I plan to try out this afternoon.  I've changed it up a lot, but this recipe is based loosely on a recipe in Dr. BBQ's Big Time Barbecue Cookbook.

I call this a marinade because a brine would have substantially more salt.  I use this marinade by injecting it into chicken with a Cabela's injector and letting it marinade in the refrigerator overnight.