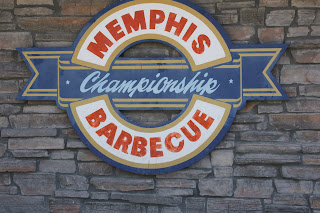 We spent several days in Las Vegas last week on vacation. On the way to the hotel from the airport we stopped by Memphis Championship Barbecue for lunch. We arrived at the location closest to the airport a few minutes before the restaurant opened at 11 a.m. on a Thursday and including us, there were four customers in line for 'que. 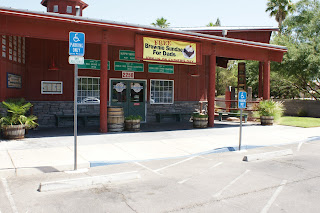 I had brisket and baby back ribs. Both were good. I loved the atmosphere. If you're in Las Vegas, I recommend stopping by one of the several locations in the area.
Posted by The BBQ Guy at 10:33 AM 1 comment:

No matter what your politics are, this is an important movie. Read more on the Food Inc. website. If you would rather hear a radio clip about the movie, National Public Radio recently hosted a feature piece on the movie with the creators. Listen here. It's not just the producer that impacts our food system. It's impacted by those that process the food too.

I've written on this blog a few times about labeling food properly. I'll go on record again that I believe imported food should be prominently labeled as such. I also believe the genetically modified food should labeled. The "food production system" needs to worry a little less about cheap and easy, and worry a little more about nutrition and health. After all, isn't that the real reason we eat it in the first place?

Looking at pictures of pigs from 20 years ago and comparing them to pictures of pigs raised today, it's easy to see that the genetics of hog farming have changed. It's also been documented that pork today doesn't taste like it did 20 years ago. It's much less flavorful. This has enabled a resurgence in heritage pork breeds and free range growing methods.

I urge you to support your local farmers. Buy local if you can and buy direct from the producer when possible. More money goes to the farmer and it's easier on the environment. Did you know that almost 50% of food costs are related to transportation expenses of moving it from farm to grocery store? Talk about saving fossil fuels.

It's a little more difficult and it might cost a little more to buy locally, but it's worth it. If everyone did this, we'd probably all be healthier too.
Posted by The BBQ Guy at 9:48 AM 2 comments:

How to BBQ Brisket

Brisket has become one of my favorite foods to barbecue. A pencil width slice of properly cooked brisket lightly coated with some Blues Hog BBQ Sauce is hard to beat.

I prefer to cook briskets in my Weber Smokey Mountain (WSM). I receive quite a few e-mails asking for help with barbecue brisket and thought I'd share some questions I received today.

Do you cook brisket with direct or indirect heat?
I use indirect heat and cook the brisket slowly at a temperature of 225-250 degrees.

Do you cook with fat cap up or fat cap down?
I begin cooking the brisket fat cap up for the first cooking segment. I don't flip until the brisket reaches 130 degrees or so. That's the point when the bark starts to harden a little bit. Then I flip it to fat side down. I used to skip this part but wanted a little more bark and found that this method will promote more bark formation.

Do you use foil?
I wrap in foil when the internal brisket temp is 165 degrees or if it's been cooking for at least 5 hours. Most of my briskets are completely done in 8 hours or so. I cook to an internal temp of 196-198 degrees and hold them in an Igloo cooler for a few hours to "rest" before slicing.

How to bbq ribs

Linda took some pictures as I prepared 8 slabs of ribs for the neighbors birthday party. 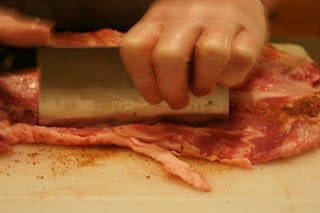 First, I trimmed the extra meat at the "knuckle" to create a St. Louis cut. 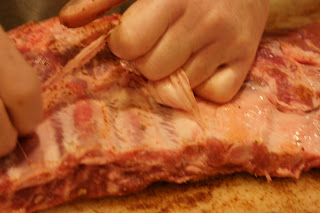 Then I removed the membrane. Some people leave it on, but it makes the ribs tough to chew. 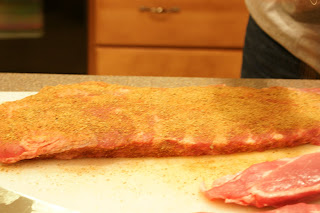 Next, I sprinkle the ribs with the "secret" dry rub. In this case, I used my "Southern Rub" that I originally developed for brisket. 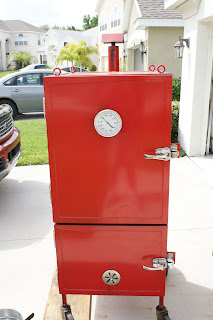 Email ThisBlogThis!Share to TwitterShare to FacebookShare to Pinterest
Labels: how to bbq ribs

Championship BBQ.TV has a nice "how to bbq" video for preparing pork butts for smoking in the Weber Smokey Mountain.

The video is a testament to the capabilities of the WSM and how it will perform in cold weather.

When I prepare pork butts I prefer to wrap the pork in aluminum foil when the butts reach an internal temperature of 160-165 degrees. This will reduce the amount of dark black coloring on the outside of the pork butts.

Email ThisBlogThis!Share to TwitterShare to FacebookShare to Pinterest
Labels: how to bbq pork

Wendy Taylor, of Sixapart.com, asked me to contribute my list of Top 10 BBQ Blogs. Sixapart is well known for creating the popular Typepad Blogging software.

Here's my list of favorites (in no particular order):

Ulika Food Blog
Written by a professional bbq contest competitor, this bbq blog is a reliable source of information for the bbq community in Nashville, TN. The blog includes articles about bbq restaurants and compeitions in the area with lots and lots of pictures.

Martin's BBQ Blog
If you've ever thought about starting a restaurant, or specifically a bbq themed restaurant, Pat Martin's experiences chronicled on his blog might make you think twice, or three or four times. He has documented the entire experience from start-up to full operation on his blog.

White Trash BBQ
I visited this blog initially for the catchy name, but I keep going back for the recipes and insight into the New York bbq scene. The site features reviews and news about New York restaurants - not just bbq ones.

Q Haven BBQ Blog
A documentary for New England BBQ contests, this site is also filled with tasty bbq recipes and pictures. There is a fair amount of KCBS bbq competition results too.

Bucky's Barbecue and Bread
This site is a wonderful source of recipes with a fair amount of bbq recipes and pictures sprinkled in. I've met the author several times on the bbq contest trail. As we say in the south, he's good people.

BBQ Blog
This blog is an extension of the world reknowned BBQ Forum created by Ray Basso. Contributors include serious bbq enthusiasts from all areas of the country giving their own unique view of bbq.

Old Dave's Po-Farm
Dave cook's just about anything in a bbq smoker. He provides pictures, recipes, and an overall bbq philosophy that is refreshing and rewarding. Pizza, corn bread, pork butt, ribs, and chicken. You can tell he loves to cook.

Cowgirl's Country Life
This cowgirl knows how to cook. Tons of pictures, recipes, and country cooking - bbq and otherwise.

All Things Barbecue
This is the blog for one of the winningest teams on the professional Kansas City Barbecue Society cooking circuit. If you're into bbq contests, this site is for definitely for you. Not too heavy on bbq recipes, but very large on bbq contest information, pictures, and all the contest happenings.
Posted by The BBQ Guy at 6:35 PM 3 comments:

The Gateway City Barbeque Festival will take place July 3-4, 2009 at the Old Rock House in downtown St. Louis. Entries are now being acccepted, but are limited to 20 spaces, so first come first serve. Be sure to sign up before the June 25, 2009.

For information and an applicationEmail: Melissa.payne@oldrockhousestl.com
Posted by The BBQ Guy at 7:22 PM 1 comment: