I've been following a discussion over over on The BBQ Forum with quite a bit of interest. There were accusations made about the fairness and consistency of the selection of teams for an upcoming invitational bbq contest. The issue has been rectified, but it brings a few things to my mind that I have to get off my chest.

The internet has become such a large part of daily life that rather than pick up the telephone and call someone directly, or even communicate one-on-one via e-mail with direct questions people sometimes choose to post their grievances on a public discussion board.

I'm not against the internet or discussion boards, but I think the parties being accused should have been approached "off line" first and given a chance to provide a solution before accusations were made about a conspiracy and stirring the pot. In the future I hope that before complaints about bbq sanctioning organizations are posted on discussion boards, that those with authority to make changes are contacted first and given a chance to correct the issue(s). If a satisfactory answer is not given or an alternative provided, perhaps it's o.k. to air the issue publicly. Maybe it's just me, but I suspect there are others who feel the same way.

The same logic goes for product purchases. If I purchase a defective product from a retailer or directly from the manufacturer, I try to contact the manager or owner for a resolution. In 99% of the cases, a solution is given.

These types of petty squables only hurt (not help) the sport in the long run. I'm a pretty big NASCAR fan and I can't really imagine Jimmy Johnson or Dale Earnhardt, Jr. making their complaints known to NASCAR through an internet website. I'll bet they pick up the phone and go straight the source - someone who can actually address issues and solve problems.
Posted by The BBQ Guy at 2:02 PM 3 comments: During the past five or so years, I've been using Shake's Honey Brine for deep fried turkey and don't think I'll ever cook a turkey in the oven again. If you don't have a spare refrigerator or room in your current refrigerator to brine the whole bird, you can also inject the honey brine the night before and obtain similar results.

Once you've had a deep fried turkey, you'll never want to eat an old fashioned roasted turkey again, especially if you're doing the cooking. However, there are some pre-cautions you should take when using this cooking method.

This article from Underwriters Laboratories (UL) outlines some additional safety considerations.
If you're thinking of purchasing a turkey fryer, Bayou Classic makes a nice 30-quart unit.

You can use your turkey fryer all-year round for fried fish, low country boils, making gumbo, cooking corn on the cob, chili, etc. The possibilities are only limited by by your own imagination. When cooking for large groups of guests, you can take the cooking outside and leave more room in the house to entertain.
Posted by The BBQ Guy at 8:25 AM 4 comments: 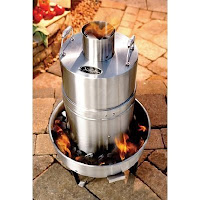 I had a close up look at the Orion cookers a few years ago. They looked interesting, but weren't really my cup of tea so to speak. My opinion might be changing.

I was checking out Old Dave's bbq blog and things on the Po Farm are getting interesting. Check out Old Dave's review of the 70 minute spare ribs cooked on the Orion cooker. Nope...that's not a mis-print. He really did cook some pretty good looking spare ribs in 70 minutes. I'm sure the Blues Hog and honey helped things along pretty well, but Dave posted some very nice looking pictures.
I've already got 3 smokers...why not four? The more the merrier right?
Posted by The BBQ Guy at 9:46 PM No comments:

Please don't let this happen to you. If you choose to use a turkey fryer, please be careful. I've fried two turkeys this year so far and I will be frying another one on Thanksgiving. This video is a good example of what can happen if you are not careful.

HomeSafetyCouncil.org provides some turkey fryer safety tips on their website to help reduce the chance of a turkey fryer fire.

My biggest tips include:

1. pick a location away from the house or garage

2. concrete is preferred versus a wooden deck

4. use a thermometer to measure the oil temperature

5. turn off the fire before adding oil and before s-l-o-w-l-y adding the turkey