Linda and I took a short drive to Willis, Michigan after work to eat at Boneheads BBQ.

I had brisket and Linda had the St. Louis ribs. 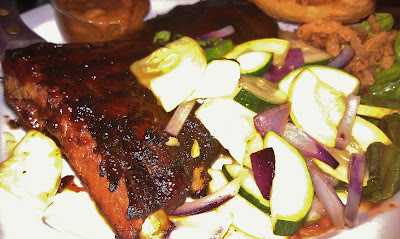 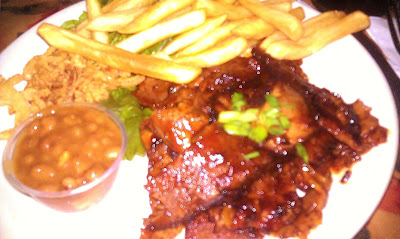 The restaurant is in a restored historical building.  The dining room is on the small side for the dinner rush.  With a full restaurant, it becomes a little crowded. At our table for two, the table for 5 next door was a distraction.  We heard about scare crows, gardening, and the recent phone calls to great-grandmother. It was hard to carry on a conversation because their conversation was on the loud side.

Based on the name - Boneheads BBQ - I expected a menu focused on primarily traditional bbq, but they also offer many other items like seafood and prime rib.

The bbq brisket was actually pretty good.  The rib I bummed from Linda's plate was on the average side, but I've had ribs in other restaurants that were much, much worse.

Before anyone draws a conclusion that I didn't like the restaurant, I should add that we do plan to return again. It's slightly above average restaurant barbecue, but they don't concentrate solely on serving barbecue items.
Posted by The BBQ Guy at 11:14 PM 7 comments:

I have been thinking about the possibility of starting an online bbq store.  I marketed my own products for several years, but recently I've identified a void in the market place for purveyors of high quality bbq products including bbq sauces and spice rubs.

Many of the business gurus I've read say that when starting a business you should do what you enjoy most. The theory is that if you would do it for free then it's more likely that you have the passion and energy to put in the hard work to build a business that's not likely to generate any tangible profits in the short term.
Posted by The BBQ Guy at 7:58 PM 1 comment: 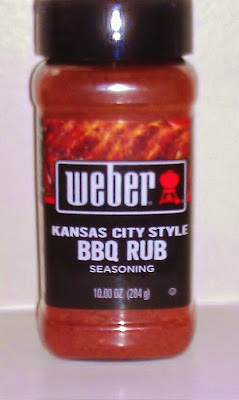 I am cooking four pork butts today for a work event later in the week.  While at Sam's Club picking up the meat last night I realized that my favorite bbq rub is currently M.I.A. after our recent relocation to Michigan. The movers do a good job, but sometimes I wonder how certain things turn up in certain boxes.

On the way to the check outs I stopped by the spice aisle to pick up some of the key ingredients to make a bbq rub from scratch. I decided to save money buying stuff I already have and picked up two bottles of Kansas City Style BBQ Rub Seasoning with the famous Weber trademark label instead. (The rub is actually bottled by ACH Food Companies in Memphis, TN). Sam's had the 10 oz. bottle for $4.00. One bottle was enough to season three pork butts.

The rub has all the traditional ingredients you would expect to see in a quality bbq seasoning including turbinado sugar, salt, chili pepper, dehydrated onion, dehydrated garlic, paprika, red pepper, spices, spice extracts, and silicon dioxide (an anti-caking agent). One additional ingredient surprised me - soy.  I did a double take on the ingredients list, but it's there.

Apparently soy lecithin is a popular dietary supplement, but the most probable reason it's showing up this bbq rub is it's other common use in commercial food applications as an emulsifying agent.
Posted by The BBQ Guy at 10:21 AM 3 comments: