In the market for a bbq tow vehicle?

If you're in the market for a vehicle to haul your bbq equipment, this video might interest you.

I'll also offer a disclaimer that I do own an 1998 F-150 with the 5.4L engine and a 2004 Ford Explorer V8 . During our first several years of competition bbq, we hauled our WSM, Backwoods Smoker, and equipment in our truck bed. A few years later we graduated to a 16' Doolittle trailer that I towed with the Explorer.

If you're buying a new bbq cooker, it's wise to keep your tow vehicle in mind when making the choice. For example, you probably don't need a 1 ton dually to haul your WSMs. Likewise, I'd advise against towing a top of the line Klose offset smoker with your 6-cylinder SUV.

Think about towing capacity, braking, stability, and comfort when making your choices.
Posted by The BBQ Guy at 11:29 PM 1 comment:

Make Your Own Bacon

He made a cold smoker out of three book lockers/gym lockers, flexible tubing used for venting a dryer, a fan from an old computer connected to a battery, some alumimun foil, a cast iron skillet and some wood chips for smoke. He used a Polder digital thermometer to make sure the temperature was monitored. He advised not let the temp in the smoking chamber rise above 80 degrees. He is the MacGyver of food.

If you've never watched an Alton Brown episode of Good Eats, check it out some time on Food Network.
Posted by The BBQ Guy at 4:41 PM 4 comments:

I'm enjoying a week in Tennessee visiting my in-laws who live near Manchester. It was 12 degrees this morning and is currently 19 degrees. The forecasters are predicting warmer weather tomorrow - 29 degrees. To quote Linda from last night, "There's something to be said for living in Florida during this time of year."

Tomorrow, we're going to take a drive up to Nolensville to visit my sister-in-law. I've been trying to find an excuse to visit Martin's BBQ restaurant since I found his blog two years ago. I've enjoyed reading about his experiences - good and bad. I'll try to take a couple of pictures while we're there.
Posted by The BBQ Guy at 9:49 PM 3 comments: 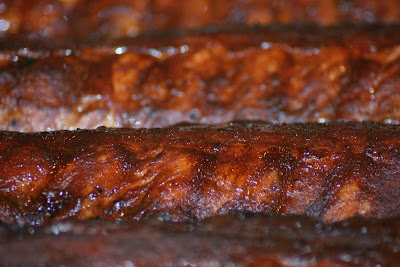 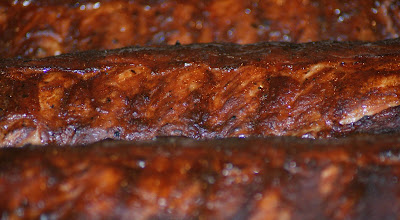 I cooked six slabs of ribs today and thought I'd share a couple of pictures. They're vacuum sealed and in the freezer awaiting a Christmas delivery.
These ribs are without bbq sauce, since I planned to freeze them and reheat them in a few weeks. I usually reheat ribs in the microwave and brush on some sauce prior to serving them.
I cooked them 2 hours at 250 degrees. Then I wrapped them in foil with some honey, brown sugar, and mixture of apple/grape juice and cooked until the meat began to pull away from the bones.
Posted by The BBQ Guy at 8:00 PM 2 comments:

Tax on Beef and Pork

If you're like me, you'll probably find the EPA's latest idea to tax greenhouse gases generated by livestock preposterous. The first time I read about taxing methane emissions generated by beef cattle, dairy cows, and hogs, I thought it was some sort of joke. You know...some politician's leaving his job once the new administration takes over and decided to put out a news release to get a rise out of people for self amusement. But, apparently it's a real proposal. Here's a document published on Regulations.gov that discusses all the scientific aspects of animal "emissions".

I know one thing for sure, if they put a tax on cattle and hogs for this we'll have to add meat to the list of imported products that already includes cars, toys, textiles, appliances, etc. It will put farmers out of business entirely. It will definitely raise the price of bbq too.

The American Farm Bureau estimates "annual assessments could reach $175 per dairy cow, $87.50 per head of beef cattle and $20 per hog.