I've been planning to bbq a tri tip for several weeks. This morning I visited the local meat counter in search of a tri tip, but after 5 minutes of searching for "tri tip" I had to settle for a 3 pound sirloin tip roast. The sirloin tip roast is a tri tip cousin, but still not exactly what I had hoped for.

I started by preparing the tip roast for 6 hours of marinating.

I rubbed the roast with a thin layer of my brisket rub left over from a brisket cook a couple of weeks ago. Using my Jaccard, I pierced the roast consistently and then repeated the process with two more thin layers of brisket rub on the top and bottom. I have no "proof" but it seems that using the Jaccard after applying the rub versus before helps get some of the rub down into the thicker part of the meat.

I banked the coals to one side of my Weber charcoal grill and I pre-heated the grill to 275 degrees. I cooked the roast for 25 minutes. I then flipped the roast and cooked it for another 25 minutes.
﻿﻿ 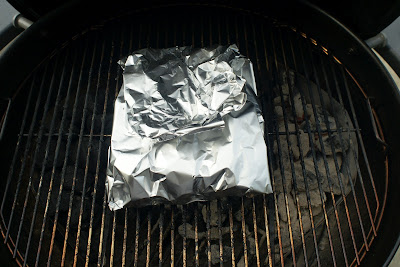 Next, I wrapped the roast in foil and cooked it for another 15 minutes. The temperature in the grill had climbed to 375 degrees just prior to wrapping.

I let the roast rest for 15 minutes before slicing. The internal temperature of the roast registered 146 degrees at that point. The USDA recommends beef be cooked to a minimum of 145 degrees. 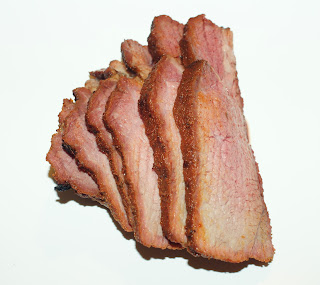 The picture above doesn't do the smoke ring on those slices justice. It was tremendous. The slices were a little on the rare side for my personal tastes, but the roast was delicious. I'll definitely cook another sirloin tip roast when tri tip isn't available.
Posted by The BBQ Guy at 7:10 PM 6 comments:


AE's newest television series Barter Kings has given me an idea - Barter for BBQ.

For anyone in Belleville-Canton-Plymouth-Livonia area of Michigan...I'd be willing to trade day of barbecue lessons for something of equal value. We'd cook chicken thighs, pork ribs, pork butts, and beef brisket using competition methods and of course we'd sample each and you would leave with a vacuum sealed bag of each of the leftovers.

Email ThisBlogThis!Share to TwitterShare to FacebookShare to Pinterest
Labels: barter

Part of the bbq segment featured Cheaters Backyard Baby Back Ribs. Most ribs I've ever eaten or smoked were rubbed with spices, salt, and sugar; then sauced with a tomato based sauce containing salt, brown sugar, cumin, pepper, garlic powder, and onion powder. The "Cheaters" ribs from City Grocery were slathered in a mustard sauce like I've never eaten or seen before.

I've looked on the GMA website, but haven't found the exact recipe for the mustard sauce, but the segment did explain that "cheaters" comes from wrapping the ribs in plastic wrap and then in aluminum foil and then cooking them on a bbq smoker.

To read more about City Grocery, you can read their blog here.

If you would like to try to make a mustard bbq sauce for your next rib cook, AmazingRibs.com has a nice looking mustard bbq sauce recipe that might be worth a look.
Posted by The BBQ Guy at 9:00 PM 6 comments:

I lived in Plymouth, Michigan from 2004 - 2007 and during that time there wasn't a barbecue restaurant to speak of in the Plymouth-Canton area. So after we moved back to the area in July 2011, I was kind of excited to see an "Opening Soon" sign on Ford Road announcing a new barbecue restaurant.

I lived in temporary housing for several months waiting to close on our home and stopped by the restaurant several times hoping to eat some barbecue. My smokers were in storage and I wanted to cure the craving for some 'que. But each time I pulled in the parking lot, the "Opening Soon" sign was still being displayed.

We were running errands today in Canton and were surprised to see Real BarBQ open for business. After cooking 35 lbs of brisket and pork butt for a work event later this week, we weren't craving bbq but after waiting 10 1/2 months for the opening we couldn't resist giving it a try.


﻿
﻿I ordered the Ribs + 1 (my plus 1 was brisket) and Linda ordered the Real Chop Shop (pulled pork served on a brioche roll).

While we waited for our meal, I was offered a tour of the kitchen. I didn't ask for permission to take a picture, but they did show me the Southern Pride they cook everything on - 1,100 lbs of pork butts is a lot of barbecue goodness.

I liked the ribs and brisket. I'm partial to my own homemade bbq, but it was good restaurant bbq. The atmosphere is very nice - actually much nicer than I anticipated. The staff is very friendly and the kitchen was organized and clean. Linda is a tough critic for pulled pork and didn't "love" it.

We'll definitely go back and will certainly recommend it to friends and co-workers. After driving an hour to eat at Slow's in Detroit to be told there was a 3 hour wait, it's good to know there is a nice bbq restaurant option much closer to home.

In case you're wondering what a brioche roll (I know I was) here is the definition from Wikipedia: brioche
Posted by The BBQ Guy at 3:22 PM 5 comments:

Apologies to cat lovers, but just like that old saying "there's more than one way to skin a cat", there are several ways to cook a brisket.

I've experimented with all the techniques through the years, but during a Saturday afternoon practice cook using my Weber Smokey Mountain several years ago I stumbled on a hybrid method that combines the best of all those options.

1. Start the brisket fat side up and cook for 3 hours
2. Spritz with apple juice every 90 minutes to promote bark formation (I prefer Martinelli's)
3. Flip the brisket to fat side down and cook for 2 hours
4. Wrap in foil when brisket reaches 165 degrees (or after 5 hours)
5. Cook brisket to 194 degrees measured in the middle of the flat
6. Allow brisket to "rest" inside an Igloo cooler wrapped in towels for at least 2 hours (4 hours is even better)
7. Slice brisket with an electric knife (I use a Black and Decker)
8. Lightly sauce each brisket slice with Blues Hog BBQ Sauce before serving
9. Vacuum seal the  "extra" brisket slices and freeze to eat later when you get the craving


This technique works very well on my old Weber Smokey Mountain. It's won several dollars in bbq contests and it's won the hearts of family, neighbors, and co-workers for the past 10 years. This exact technique might not work the same way on an offset smoker, Big Green Egg, pellet smoker, etc. but perhaps through my trial and error experimentation you will find a golden nugget you like to assist with your brisket cooking results.