Linda and I stopped by The Butlers BBQ today on the way to a festival in St. Petersburg.  This is not the typical bbq fare you find in Florida. If you like lots of brown sugar, honey, molasses, corn syrup, and other sticky gooey "stuff" in your bbq pork sandwiches and ribs, then you're in for a surprise. 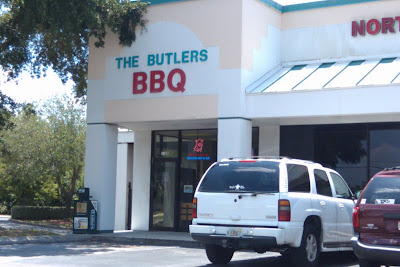 If you like to try different styles of bbq and get bored eating the same old same old every day, then you need to try Butlers BBQ. 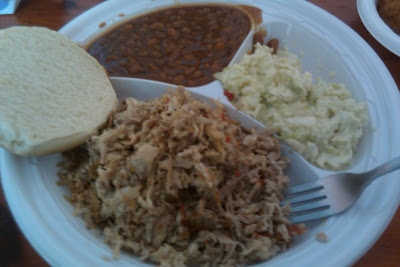 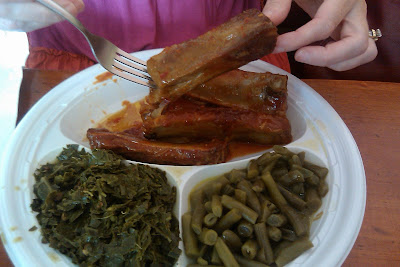 Pork ribs
I had coleslaw and baked beans with the chopped pork.  The coleslaw was pretty typical, but the baked beans were unique. I believe they use coffee in the recipe. The baked beans were pretty good and again different than what I'm used to.
Linda had collard greens and green beans with her pork ribs.  The green beans were not quite what she expected, but the collard greens were excellent. I think she liked them better than the ribs.
This bbq is seasoned with vinegar and red pepper flakes.  I've tasted similar flavors in the Carolinas and Tennessee.  It's served that way and there is a red sauce on the table (but I did't really need it).
Posted by The BBQ Guy at 7:01 PM 3 comments: 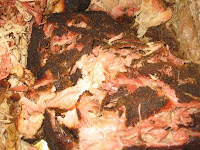 Occasionally I like to watch bbq videos on YouTube.com.  Tonight while waiting for Linda to get home from a board meeting I stumbled across a bbq demonstration video that promised to explain in every detail the step-by-step process for making wonderful pulled pork sandwiches.  The video had more than 8,000 views and has been on YouTube.com since July 2009 so it must be pretty good, right?

I hit the "play" button and started watching the first video (actually part 1 of a two part series).

I didn't make it through the entire 9 minute and 31 second clip.  About 2 minutes in the video host explained that he was preparing to bbq his $27.09 bone in pork butt roast weighing 6.956 lbs for 12 - 14 hours on his ceramic bbq cooker.  I actually re-wound the video a little to make sure I hadn't misunderstood - Did he really just say 12 - 14 hours? Yep. Confirmed it.

I didn't catch the price of the pork butt the first time through. - Did he really pay $27 for one pork butt? Yep. Confirmed it. And it's clearly visible on the packing label. I can buy two for that price in my neck of the woods, but it's obvious to me that the video host must live in an area where the economy is doing much better than my local economy here in Tampa.

I think I'd have to switch to barbecuing some other kind of meat before shelling out $27 for 5 lbs of meat (cooked weight). Did he mention he lives near Oakland, California? Yep. Confirmed it.  All those news stories about how the failing real estate market and massive numbers of forclosures have decimated the state and local economies throughout the state must have it wrong.

Well, I stopped the first video there and re-heated some leftover pork I had in the refrigerator for my supper. But I couldn't stop thinking about the video I had just watched. After finishing my supper, I just had to watch Part 2.

I watched the first minute or so and the video host explained he'd be using a ceramic cooker equipped with an expensive digital temperature controller and some kind of golf club that spews out propane to light the charcoal and fancy wood chips he was using.  It was 10 p.m. and he'd be back in a hour to get the thing cooking.

At that point, I skipped the next 9 minutes or so and fast forwarded to end of the video to get the bottom line up front.

Then he asked the audience to overlook the bark and promised that it would still taste good.  - What? No way I'm even thinking about eating that.

He pulled out some hamburger buns and slathered them with what looked like 1/2 the bottle of bbq sauce.  - Not really 1/2, but I'm in disbelief at this point. It honestly seemed like 1/2 as I felt like hyperventilating. (Maybe it was really just a 1/4 of the bottle.)

He then added some cole slaw and some orange colored hot sauce. Look out, he said, it's really hot.

I must be doing these bbq things wrong. Some of the best bbq pulled pork I've ever made was cooked on a cheap water smoker, with cheap charcoal, and cheap wood. I don't use a computer to control my cooker temperature. Oh, I see... I'm using aluminum foil after four or five hours.

I've got to start getting less sleep and spending a whole lot more money on bbq gadgets and gimmicks. I can't wait for Linda to get home and let her know (lol)!

Am I really getting this cynical as I grow older? Yep. Confirmed it.
Posted by The BBQ Guy at 8:20 PM 8 comments:

I barbecued a spatchcock chicken today and made a video of the entire process.  If the term spatchcock is a new term for you, it simply means "to prepare (a dressed chicken) for grilling by splitting open" (definition courtesy of TheFreeDictionary.com).

I used a recipe from the Smoke & Spice

bbq cookbook (page 175) called Birds of Paradise and a 3 pound cornish rock chicken grown "free range" at The Dam Ranch near Bradenton, FL. And, if you're in the mood for a laugh or two, take a few mintues and check out Brewster the Rooster on their web page.

The recipe uses a marinade of garlic cloves, mint, parsley, cilantro, salt, and olive oil coupled with a basting mojo juice made from orange juice, lime juice, garlic cloves, cumin, oregano, salt, and more cilantro. I marinated the chicken overnight in the refrigerator and then cooked it on my Weber Smokey Mountain.

I made the Top Ten of the Honeysuckle White® Take On Turkey Challenge. I'd appreciate your vote if you have a few minutes. If you read bbq blogs on the Internet, you'll probably recognize several of the entrants.
Before you view my video, I'll add one qualifier....I'm not an actor, I don't play one on TV, and I didn't sleep at a Holiday Inn Express last night....but making the video was a lot of fun.
I smoked a whole turkey tropical style on my WSM.

"You Wouldn't Boil Bacon, Would You?"

I love this video featuring the BBQ Rules from JB.

I've included product links from Amazon.com on my bbq blog and TheBBQGuy.com for about 9 years. During that time I've sold my share of

by Ray Lampe, but without question the most popular selling bbq book on both sites combined together is Building Barbecues & Outdoor Kitchens

It's a very inexpensive paperbook that sells for about $8 new and about $3 used on Amazon.com. It was published in 2001 and is only 144 pages, but it still outsells every other bbq book on my websites.

I don't own the book and I must confess that I am not very handy with a hammer and nails, bricks and mortar, or welders and plate steel, but I'm thinking about buying it to see for myself why it's so popular.

Although an outdoor kitchen is on my long list of needs and wants (Linda keeps shortening this list from time to time), I'll probably settle for updating my charcoal grill.  I've been using a very little and cheaply built "Little Grill That Could" for the past several years and I think the time has come to upgrade to a Weber One Touch Gold

(I love the blue one) or Weber One Touch Platimum

charcoal grill sometime soon. I'm not sure the stand is worth $100 extra or not, but I'm sure Linda will weigh in on that too if I'm lucky (or unlucky), depending on my ability to keep her in tune with my bbq wishes (or not).

I received the press release re-printed below via e-mail today from Celeste Dwyer, (celeste@lest77.com). For additional information, visit http://www.celebratethevalley.com/

DOVER, VT—April 29, 2010—Celebrate the Valley announces major additions to this year’s Taste of the Deerfield Valley event slated for Saturday, September 11 from 9am-5pm at the base of Mount Snow Resort in Dover, Vermont. Myron Mixon, three-time World BBQ Champion and TV star of TLC’s Pitmasters, will join the Taste of the Deerfield Valley food fest on Saturday to demonstrate his barbecueing skills. The night before the Taste, Mixon will entertain and demonstrate his barbecue prowess at a special dinner hosted by a local Inn.

The Taste of the Deerfield Valley showcases dozens of top restaurants in the area to give the public the opportunity to taste specialty items from each of them and the opportunity to vote for their favorite taste. A portion of the proceeds will go to the Junior Iron Chef program. The Deerfield Valley Food Pantry will be on-hand accepting food donations.
Also joining the Taste this year, Myron Mixon will be joined by Chef Robert Barral, owner of Café Province and former New England Culinary Institute executive chef paired with the Twin Valley Schools’ Junior Iron Chefs. They will start the day with a special demonstration on Saturday morning. Saturday afternoon will feature tastes from over a dozen restaurants, live music, craft fair and kids activities.
The Taste has also teamed up with the Deerfield Valley Healthcare Volunteers to help revive the popular “Art on the Mountain” three-day art show at Mount Snow.
The following day, Sunday, September 12, the Deerfield Valley Community Cares is organizing the Best Dam Walk —a great way to walk off any indulging at the Taste. There are several walks available. The one-way walk is the most appropriate for families and will begin at 10am. Each entering adult will be asked to have $50 worth of sponsors (five people at $10 each or any other combination) and each child under 12 will be asked to have $10 worth of sponsors. The walk will be held rain or shine.
Taste of the Deerfield Valley is sponsored by the Celebrate the Valley, Inc., the Town of Dover, g.housen, 92.7 WKVT, Outside Television and g. Housen. Tickets for the Taste are $15 for adults, $5 for children age 7-12, and free for children 6 and under. Cooking demonstration tickets are additional. For more information, please go to: http://www.celebratethevalley.com/.
Posted by The BBQ Guy at 8:54 PM No comments:

Sometimes when the urge for bbq strikes, you don't always have ideal equipment to work with, but you make do with what you have. I grilled this mahi mahi on this "park style" grill

behind the home we rented on St. George Island on July Fourth Weekend. 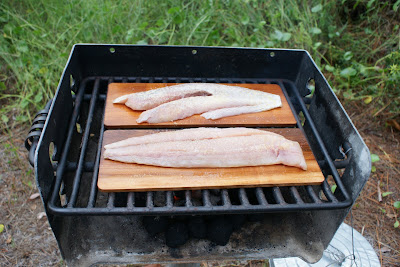 on a cedar plank. 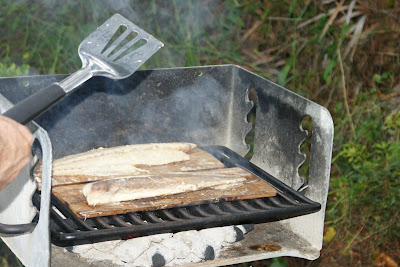 It's been awhile since I used a grill sans lid, so toward the end of the cook I had to "turn up the heat" to finish things off.  It was getting dark when the second picture was taken, so the camera flash added some funny looking "wash out".
Posted by The BBQ Guy at 9:09 PM 2 comments: 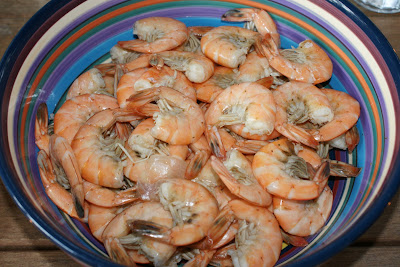 I recently took a short vacation from bbq and spent the weekend at St. George Island.  We did manage to bbq a little while we were there, but on Saturday night we kicked off the weekend with a low country boil of corn on the cob, potatoes, scallops, onions, and these very tastey and fresh from the boat Gulf Shrimp.
Posted by The BBQ Guy at 8:47 PM No comments: