Tonight I grilled some bison burgers for supper. If you've never eaten bison, you're missing out.
Bison has a flavor signature that differs from beef, in that it has just a hint of sweetness. I also think it's a slightly heavier taste than traditional beef. I have no scientific proof, but my gut tells me that since bison has much less fat and grease than a hamburger, you taste more of the actual meat.
If you try some, please don't over cook it. Since it has less fat than hamburger, you don't need to cook it as much. 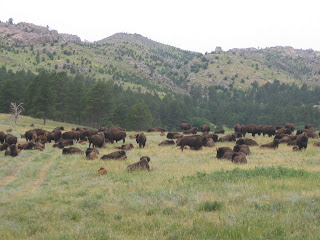 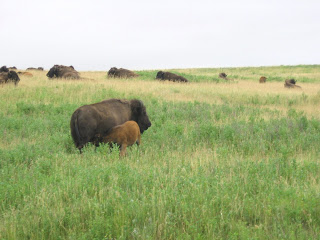 I took these pictures during a trip to Mount Rushmore two years ago.
Posted by The BBQ Guy at 9:06 PM 2 comments:

Email ThisBlogThis!Share to TwitterShare to FacebookShare to Pinterest
Labels: bison

I received this announcement from the Florida Barbecue Association today.

This contest is a State Championship and a Jack Daniels Qualifier.

The contest is looking for a few more competitors.
Posted by The BBQ Guy at 10:00 PM No comments:

We've been competing in bbq contests for almost 5 years now and have had some small successes here and there. When I decided to start competing in Florida Barbecue Association events, I started out cooking with another team. I mainly did the dishes and served as a "go fer", but I learned about the equipment I would need and I also learned just how hard it is to win a bbq contest.

I learned that organization and planning ahead are key to turning in good bbq samples. Any time that I cook bbq I try to do it the same way I would if I was at a contest. It's kind of become second nature now, but I try to use the same sauce, spices and meats. If I do decide to change something with the hopes of improving the product, I try to only change one thing at a time, so I can better track the effects.

I started cooking on a Weber Smokey Mountain water smoker because it was very affordable and since it was an upright style, when I decided to look at bigger models for competing, I naturally gravitated toward the upright-style smokers such as the Backwoods Smoker.

I use a Party model to cook my chicken and I cook the briskets in the WSM. I cook ribs and butts in my other upright--the 2 x 2 McCullough smoker made for me by James McCullough of New Smyrna, FL. James is a great guy and has been cooking bbq and making smokers for more than 20 years. He also makes large trailer mounted rotisseries that are used by competitors and caters around central Florida.

I think the upright smokers allow me to concentrate on the bbq product more and less on maintaining heat and adding wood. My uprights are basically trouble free. They are very efficient and require only about 25-30 lbs of charcoal to cook a contest.

I purchased a very good bbq video set last winter: Inside The World of Championship Barbecue, and BBQ Secrets: The Master Guide To Extraordinary Barbecue Cookin’.

I watched the videos and took notes and tried to relate what I was doing to the video advice and made a couple of adjustments that have really helped our results.

Inside The World of Championship Barbecue takes you inside a major championship competition. Filmed at the American Royal Barbecue in Kansas City, you will gain solid tips from among the top barbecue cooks in this sport. Loaded with valuable information covering the entire (KCBS style) competition process, this movie is intended to help new competitors chart a winning course to victory.

In BBQ Secrets: The Master Guide To Extraordinary Barbecue Cookin’, 3 world champion barbecue competition cooks, and restaurateur’s, share their unique approaches to barbecue cooking. Learn how to apply the authentic “low and slow” methods to making pork ribs, shoulder, chicken, whole hog, beef brisket, and more. Master the art of making spice rubs and marinades, and how to use different woods for proper flavoring. This award-winning DVD offers a wealth of expert knowledge not readily available from other sources, and includes the champion’s own private recipes.

The video set comes with a recipe booklet that has a lot of the recipes featured in the video. I got some good ideas from the recipe book. One in particular has more than paid for the cost of the videos.
Posted by The BBQ Guy at 5:59 PM 6 comments: