We visited the George Dickel Distillery yesterday near Tullahoma, TN.  If you are ever in the area, this free tour is worth your time. The tour guide took us on a tour of the brewing facilities and answered numerous questions during our 1 1/2 hours there. When at the Jack Daniels bbq cook-off a few years ago I missed taking the tour, but after talking to a few folks that have taken both I think the quality of the George Dickel tour might surprise you. The two distilleries are pretty close together. You could probably tour them both the same day and still have time to eat some local bbq too. And if you still have time, you could also stop by Prichard's Distillery in Kelso to check out a little known Tennessee rum distiller.

My sister-in-law works for the State of Tennessee and brought me a brochure today that lists some of the other "nice to see" places in the Middle TN area. You can get the list from JackTrail.com. They also list 18 bbq restaurants worth checking into.  I've eaten at Martin's Bar-B-Que Joint in Nolensville, Whitt's and Bar-B-Cutie many times (the latter two are nothing particularly special, but they have been successful businesses in the Nashville area for many, many years) and I know lots of people who have eaten lunch at Fat Boy's Bar-B-Q in Antioch regularly. I need to try some of the others on the list during a future visit. LawLer's Barbecue in Lewisburg and JP's Fine Swine Bar-B-Que in Woodbury sound promising.
Posted by The BBQ Guy at 2:21 PM 4 comments:

Email ThisBlogThis!Share to TwitterShare to FacebookShare to Pinterest
Labels: whiskey

Pig of the Month

Linda hasn't gone back to work yet and sometimes watches Good Morning America to stay in touch with the news. A few weeks ago, GMA featured Pig of the Month Club, which is a bbq business based out of Dayton, Ohio. As a part of the holiday promotion, GMA announced a 50% off sale. Those of you who know Linda probably already know that she's got a soft spot for bargain shopping. She ordered some baby back ribs and four kinds of barbecue sauce to give it a try. 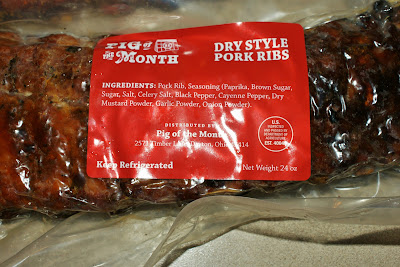 
By recreating our favorite barbecues from different regions, we’ve decided to make our own perfectly smoked barbecue ribs and lip-smacking sauces—and share the goodness with you! Pig of the Month offers ribs just the way all barbecue lovers want them: perfectly seasoned, tender-on-the-inside but crispy-on-the-outside, smoky, and mouthwatering—just tear-off-the-bones good barbecue. Our smoking technique is one that was perfected over many decades. (We didn’t just stuff ourselves full with all the barbecue; we also did research.)

Customer's can use the Create a Package feature on the website to pick and choose between pulled pork, ribs, and bbq sauce for home delivery.

Our ribs arrived pre-cooked and packed in cryovac and dry ice. She also ordered 4 kinds of barbecue sauce as a sample pack. The ribs can be reheated and served straight from the package and topped with some sauce in a few minutes time. 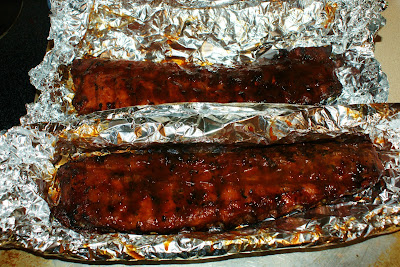 We ate a rack for supper and I took one for lunch the next day. 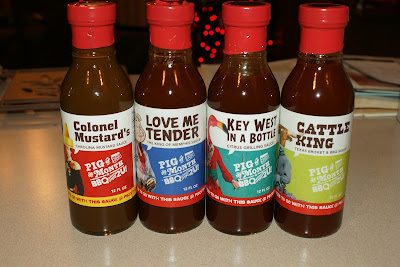