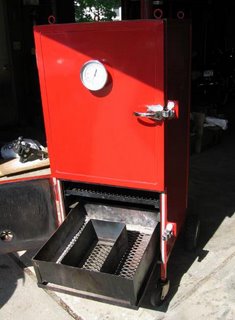 If you're having difficulty maintaining consistent and even burn times in your upright cooker, a simple charcoal maze will probably solve your problems.

The charcoal maze pictured is made from plain old sheet metal and the grate between the charcoal and the ash pan is constructed from expanded metal.

There is about a 2 inch gap between the grate and the ash pan.

This cooker also has 1 inch of insulation throughout the walls and doors, which makes it very efficient. In warm weather I can cook for 20+ hours on one load of charcoal.
Posted by The BBQ Guy at 7:44 PM 3 comments: 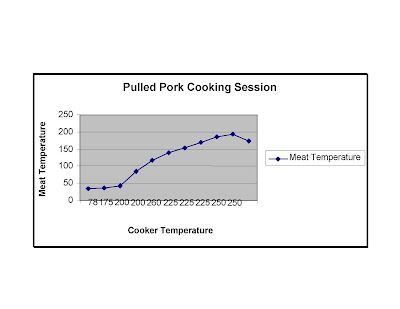 Here's an interesting graph that summarizes a pulled pork cooking session I did.
I did not record the cooker and meat temperature at strict intervals, which looks a little funny on the graph. I am sure that the meat temperature reached 140 degrees or more within the 4 hour health department guideline.
The temperature decline at the end of the session represents the "rest period" before pulling it apart for supper.
Posted by The BBQ Guy at 9:38 PM No comments:

Cooking for Real with Sunny Anderson

I've been enjoying some vacation days at home this week. A little cleaning, a little cooking, and some yard work later I sat down and watched some TV yesterday.

I ran across a new Food Network program that is totally fresh and happening. It's called Cooking for Real and it's hosted by Sunny Anderson. She made some cider brined fried chicken and cabbage slaw that looked intersting. After cooking it myself, I'm a big fan of Sunny Anderson.

I made Sunny's fried chicken for supper last night. Linda loved it so much that she proclaimed it the best fried chicken she'd ever eaten. If you're looking for a crispy and crunchy fried chicken recipe look no further. Read the recipe.

I cut back on the cayenne and used 1 tablespoon each of black pepper, white pepper, and cayenne, which turned out well.

Note: The pepper goes in the egg wash instead of the flour/corn starch. Also, instead of rolling the chicken in the flour, you've got to try the brown paper bag shake method. It really works.
Posted by The BBQ Guy at 8:10 PM 2 comments:

I am pulling out my soap box this morning. I've been thinking about this for a few weeks now and need to get some things off my chest.

I am a member of two bbq sanctioning bodies -- the Kansas City Barbeque Society and Florida Barbecue Association. To get directly to the point...I believe both organizations need to focus more attention on helping cook teams find affordable ways to compete in their contests.

I've written about my own personal strategies to reduce costs and increase revenues from my contest efforts on this blog in the past, but it's not an isolated problem. Affordability issues affect all teams that compete.

To my knowledge neither sanctioning organization has ever held any training seminars that offered step-by-step guides to assist the individual cook teams in obtaining sponsorship for local, regional, or national contests. Doing so would have a three-fold benefit:

2) sanctioning bodies would benefit by increased participation in bbq contests

I'd bet that I'm a pretty good cross-section of the barbecue population that competes in bbq contests on a semi-regular basis. I've competed in at least 25 sanctioned bbq contests during the past several years. I driven thousands of miles to get to them and spent more than $20,000 on bbq related events and equipment.

I've met some nice people. I've seen some nice areas of the country that I would have never visited if they hadn't sponsored a bbq contest. And, I've helped raise money for many, many charitable and municipal organizations. However, if something doesn't change, I'm going to have to stop doing it and I suspect that there are hundreds, if not thousands of teams like mine who have reached the same cross-roads.

The price of gasoline, meat, supplies, lodging, vehicles, contest entry fees, and cookers have continued to rise while the prize money awarded has remained stagnant on the whole. If you don't win first or second overall, you're in the hole at the end of the weekend.

I am not a professional marketer, but I am guessing that the membership of KCBS and FBA has many professional marketers in the ranks who would be willing to offer assistance. If not, I would think that a portion of the membership or sanctioning fees should be allocated to preparing downloadable materials that could be used by cook teams to solicit local and regional sponsorship. Who else other than the sanctioning bodies can provide the kind of economic data that would strengthen the sales pitch to potential sponsors?

If you agree that there is a disconnect, I'd enjoy hearing your thoughts and ideas. Or if you disagree with me and think that sponsorship for individual cook teams has nothing to do with the sanctioning body, I'd also enjoy hearing from you.

In the end, there is another alternative, although I know it's probably not practical or viable economically given the approach the contest organizers are currently taking -- reduce the entry fees to $0 and increase public participation in the contests to offset the lost revenue.

You'd be surprised how far that $250-$300 would go toward increasing cook team participation. In this manner even a top three or four in a category or two would have meaningful effects to help defray cook team expenses.

Looking for some music to barbeque by? Look no farther than Marcia Ball's Peace Love & BBQ. Here's a couple of videos from You Tube featuring this Louisiana blues woman.

The KCBS Barbeque State Championship presented by East Coast Eventz, Inc. is being held November 14 -16 . The bbq contest will award $4,000 to the grand champion and $2,000 to the reserve grand champion. Category winners receive $500 for first place.

The entry fee for the bbq contest is $245 for KCBS members who enter early. Early entrants who are non-KCBS members can register for $280. The event is being held at the War Memorial Auditorium located at 800 NE 8th Street in Fort Lauderdale, FL near Sunrise Boulevard.
Posted by The BBQ Guy at 3:39 PM No comments:

I received a flyer in the mail today announcing the Southern Pines Blues & BBQ Festival on December 12 - 13. The list of entertainers looks promising and includes Larry McCray, Johnnie Marshall, and Damon Fowler. A $10 ticket price provides admission for the entire weekend.

The winner of the FBA Triple Crown competition will receive a Willie Nelson autographed guitar and $2,000. The weekend event is sponsored in part by Old Whiskey River Kentucky Straight Bourbon Whiskey and the Perry-Taylor County Chamber of Commerce.
Posted by The BBQ Guy at 3:39 PM No comments: 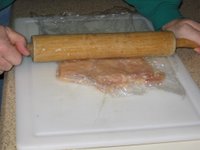 Place chicken wrap between two pieces of plastic wrap. Pound flat with a rolling pin until 1/4 inch thick. Sprinkle with salt and pepper. Add boiled ham to center, sprinkle ham with 2 TBSP shredded Swiss cheese and 1/2 TSP of chopped chives. Roll up chicken, wrap in plastic and chill for one hour. 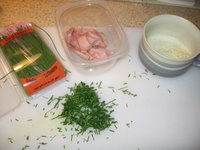 I used sandwich sliced ham. You can use boiled ham or cubed/chunked ham as alternatives. 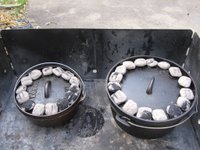 I pre-heated two Dutch Ovens--10 inch on left and 12 inch on right. 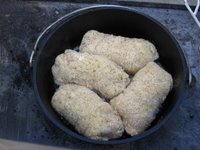 After flouring, egg washing, and rolling in bread crumbs, I added the chicken to the 10 inch oven. I cooked for 25 minutes with the lid on and turned once after 15 minutes to brown both sides of the chicken breasts. 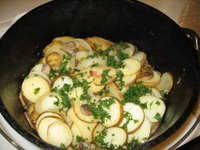 For the potatoes, Linda scrubbed with skins, browned 1 LB of bacon, drained grease, mixed in onions, mushrooms, and added the potatoes to the 12 inch oven. I then added 12 ounces of Sprite, 1 TSP of salt, 1/2 TSP of pepper. I cooked for 30 minutes with the lid on. 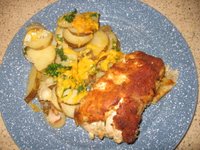 I added parsley and cheddar cheese when serving the potatoes and, although not pictured, Linda made homemade bread.
Are you hungry yet?
Recipe for Chicken Bleu Breasts and Sparkling Potatoes courtesty of Lovin' Dutch Ovens by Joan S. Larsen.
Posted by The BBQ Guy at 5:56 PM 1 comment: 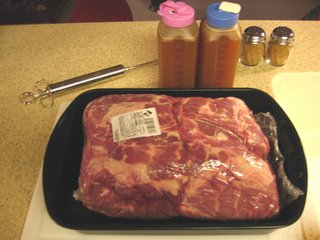