Are you one those people that thinks the only way to cook bacon is in frying pan?  Well, I was too.  A couple of weeks ago someone representing Burgers' Smokehouse from California, Missouri asked if I would like to try their new Bacon Steak Cuts.

I received two packets on my doorstep. One packet was labeled Original and the other one labeled Peppered. I decided to try the Original first and captured it all on video.

The directions recommended cooking with indirect heat at 400 degrees for 20 minutes. So that's what I did.

E.M. Burger's folks started putting up hams. E.M.'s mother, Hulda, was from Germany, and she knew curing. E.M. would rattle off in his car to Jefferson City or up to Columbia and sell the hams to city folks, lawyers, doctors and other professional people, people with cash money.

The story of the company is an inspiring little guy becomes big guy tale.  When I was a little kid, we lived in nearby Jamestown, Missouri and everybody knew about Burgers.
So if you're camping in the woods, without electricity, or your propane stove top is on the fritz, you can still enjoy wonderful bacon goodness on your charcoal grill.

FTC Disclosure:  I received two sample packets of Burgers' Smokehouse Bacon Steak Cuts to try on the grill.  The video above was taken when I grilled the "Original" flavor.
Posted by The BBQ Guy at 7:27 PM 1 comment:

Today we visited a local community fall festival.  We were still there at lunch time, and as luck would have it, there was a bbq vendor on premises. 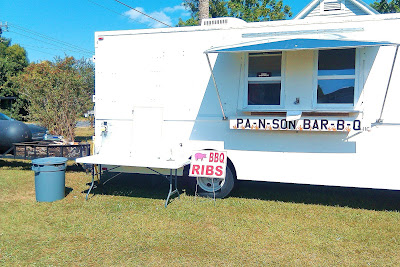 First of all, we just love the name.  At a distance I thought it said Panson Bar-B-Q, but as we got closer I realized it was Pa and Son.  Pretty cool.

I snapped this picture of their vending booth set-up.  They slow-smoke their bbq with oak wood and pull it with a nice van with a mobile kitchen.  Linda and I had pulled pork sandwiches, chips, and Coca-Cola's. 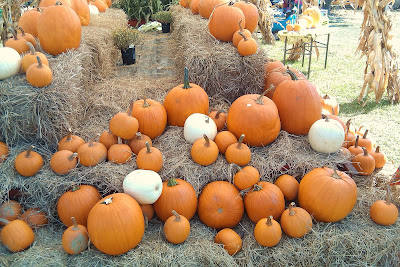 To help get you in the spirit of the season, I took a picture of this nice batch of pumpkins. Have you got your Halloween costume ready?
Posted by The BBQ Guy at 11:24 PM No comments:

If you're like me and unable to attend the 2010 Jack Daniel's bbq event, you can still participate in the event via UStream on the Internet. Watch live or watch recorded clips. Set WiredBBQ TV as a favorite and check back periodically throughout the weekend to keep up with all the most recent bbq happenings.
Posted by The BBQ Guy at 7:31 PM No comments:

I don't know much about Pinzgauer cattle, but I like to research things that others sometimes find obscure or odd (just ask my wife).  When I stumbled across an article about these cattle today, my bbq wheels starting turning.

Besides a typical farm website based in Texas and a breeder association website based in Missouri, I found Pastry Heaven, a nice blog that offeres a first hand accounting of her experiences with Pinzgauer beef.


...2 Black Angus steer will fill a 55-gallon drum with waste of fat, etc., when butchering yet ALL 12 head of Pinzgauer beef butchered only filled (2) 55-gallon drums with waste! The meat is lean and tender.

I'm not quite sure how many pounds of waste fat will fit in a 55-gallon drum, but if I'm paying for beef butchering it's w-a-y too much.

Here is another article from CattleToday.com that explains why the Pinzgauer beef is so tender:


The breed overall has been bred for docility. New research shows that the easier an animal is to handle, the better the beef. This, along with their unique enzyme make-up, makes Pinzgauer beef one of the most tender meat breeds in existence. Genetic studies have confirmed that the breed carries the tenderness gene. Also, the dressing percentage of Pinzgauer steers is very high.

If you've ever tried to herd cattle through a gate or into a pen where they didn't want to go, that docile trait is very important.

I haven't found a place to buy cuts of the beef here in West Central Florida yet, but I suspect I'll hone in on a source given more time.  I'm not sure I want to buy an entire side yet, but I'd like to try some steaks, roasts, and maybe a brisket.  The Desoto County Fair in Arcadia and Florida State Fair in Tampa, have featured some Pinzgauer shows in the past.
Posted by The BBQ Guy at 11:39 AM 2 comments:

A Letter to the BBQ Guy

Dear BBQ Guy,
As your wife I have complained at times over the long hours you spent with your smoker and grill. I have grumbled when I had to scrub a grill grate or chopping board. I have begged you to finish one BBQ sauce or rub before starting another one. I have grudgingly given you one whole shelf in the pantry for your excess BBQ supplies. I’ve sat by you as you blog about your favorite subject or search the BBQ forum for old friends. I have asked for sympathy from other wives – that your obsession was driving me crazy.

Although tonight when I sat at work with my desk in disarray and your number flashed up on the cell phone I just knew that I was about to be mad. I just knew you were calling to ask what is for dinner, but I was wrong. You reminded me of the two Buffalo fillets that you seasoned with Miner’s Mix Steak Seasoning earlier in the morning. A huge since of relief fell over me when I remembered that I was married to The BBQ Guy and for this one instance he was using his grill powers to make my life a little bit easier.

I was nervous about the Miner’s Mix because I truly like your simplistic approach to steaks, however; this new seasoning was a pleasant surprise. The rub seemed to penetrate the meat and provide a delicious flavor. It’s a definite repeat in my book.

So I say bring on the raw meat, bbq rubs, sauces, brines, and marinades and I promise to keep my sarcasm to a minimum. I promise to be your loyal assistant while you pursue your obsession to grill and smoke outdoors. As long as you promise to save the day a few days a month with your trusty Weber Smokey Mountain 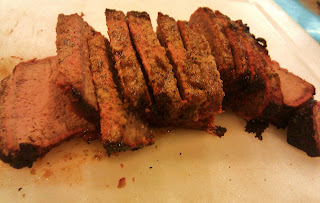 Today I barbecued my first London Broil.  The package said it was a "1st Cut London Broil Top Sirloin".  It was a 2 lb piece of lean beef.

I prepared the meat by marinating it for 8 hours to infuse flavor deep in this 1 1/2 - 2 inch thick London Broil.

Sometimes this can be difficult. A simple rub might work, but it won't penetrate the meat deeply enough to really get the flavor throughout the meat. With a rub alone, you might end up with a few bites of flavor and several bites of dry and plain tasting beef.

So, I chose a simple marinade to help improve my chances (and flavors).


Pierce the meat with a Jaccard meat tenderizer

tool or a fork to allow the marinade to penetrate deeper inside the meat.
Marinade in the refrigerator for at least 4 hours. (I recommend marinating overnight for better results.) 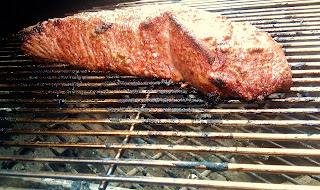 Prepare the grill for high heat grilling using lump charcoal.
Coat the grate with olive oil to help reduce tendency for the meat to “stick” to the grate. Grill using indirect heat (coals banked to the side, not directly underneath the meat). My grill temperature ranged between 400 - 450 degrees.
Cook the meat to an internal temperature of 160-165 degrees maximum (about 45 minutes for me).
London Broil is a very lean piece of beef and will have a tendency to dry out if overcooked. 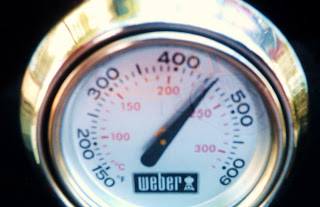 Let the meat “rest” for 5 minutes after removing from the grill prior to slicing. Slice the steaks perpendicular to the grain and enjoy.
Posted by The BBQ Guy at 6:03 PM 3 comments:

I was recently introduced to Oakridge BBQ rubs and spices.  I haven't had a chance to order any yet to give it a try, but with statements like this one on OakridgeBBQ.com, it won't be long before I place an order:

...we use absolutely NO MSG, artificial ingredients, preservatives, fillers or anti-caking agents in our spice rubs. Our unique, quality-centered approach creates truly artisanal products with bold flavors and perfectly balanced sweet-hot, salty-savory profiles unlike any other barbecue rubs or seasoning blends on the market today

Oakridge has a variety of selections including rubs for venison, beef, pork, and chicken.


I marketed my own bbq rubs and spices for a few years, so I always enjoy reading about how bbq rubs are made.  Some of the bbq rubs on the market are "private label" copy cats.  I marketed my own rubs with my own recipes that I used in competition with good results, so I find myself gravitating to others creating their own added value (not copying someone else).  It seems like all products are being sold in smaller and smaller containers to keep profits up, but OakridgeBBQ is different.  Their rubs are packaged in "bulk" containers versus smaller plastic bottles. I started selling mine in 13 oz. bottles, but my packer stopped offering that size.  Oakridge has found a way to overcome those types of challenges.
Way to go Oakridge BBQ.

Most barbecue rubs on the market today feature high percentages of salt, fillers or inferior grade spices in their formulations, often tending to be nothing more than just cheaply flavored salt in many cases. However, in stark contrast, all Oakridge BBQ rubs feature raw, unrefined cane sugar, ultra-high quality herbs and spices and just the right amount of all natural flake salt to perfectly balance each rub's flavor profile.

We spent a few days at Disney this week and stopped in Haines City for a soda on the return trip home.  Linda snapped these pictures from the passenger window as we were pulling back onto the highway. 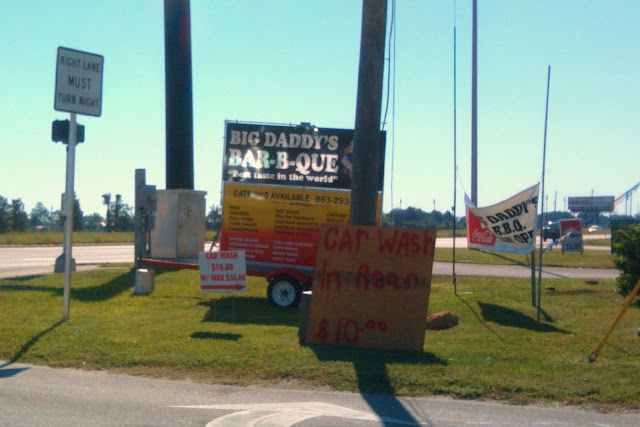 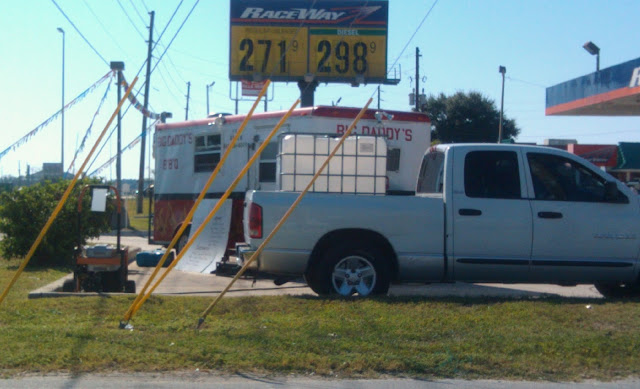 In the past few years, I've been seeing more and more of these roadside bbq stands.  This gas station had a little bit of everything available -- bbq, a hand car wash, catering, cigareettes, and...oh yeah, they did have some gasoline for sale too.
The funny thing to me though about these roadside food stands...I hardly ever see anyone buying food from them.
Posted by The BBQ Guy at 12:54 PM No comments:

It's fall and besides football that means it's time for the American Royal Barbecue contest.

We made a trip to the Royal a few years ago. It's another one of those "must see" bbq events for bbq enthusiasts.  The invitational contest is held on Friday/Saturday and the open contest occurs on Saturday/Sunday.

It's the antithesis of the Jack Daniels Barbecue World Championship event in my opinion.  As small as the Jack is, the Royal is definitely not.

When we were there in 2004, our friends who were competing had to contend with a 10+ minute walk to turn-ins and large crowds of people aka "obstacles". Under estimating the time it takes to walk from cook site to judges table can ruin and has ruined many bbq contest dreams.

Congratulations to Smokers Wild and TippyCanoe for their Grand and Reserve Grand results at the 2010 event. Here's a link to the full results from the Invitational.
Posted by The BBQ Guy at 9:57 PM 2 comments: