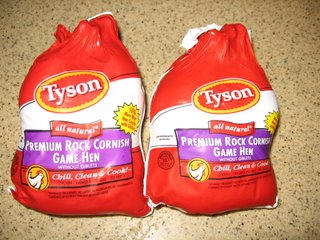 I read a post on The BBQ Forum about Beer Can Chicken last night and someone responded about using the beer can method for Rock Cornish Game Hen. The light bulb immediately clicked "on".

I've cooked Cornish Hen in my Dutch Oven and I've butterflyed them on the WSM, but I've not tried the beer can method yet. It sounded like a perfect weekend project.

I stopped by the butcher shop and picked up two frozen hens (2.25 lbs each). While they thawed, I spent some time searching for a good beer can recipe on the Internet. I came across a post about Rock Cornish Game Hen on The Zeinreich Web that details a nice method for brining them and then cooking them on the grill. I attempted to search the USDA website cited on Zeinreich for more historical information about how the meat was developed and could not find the specific information, but About.com has an article explaining that Donald Tyson created the Rock Cornish Game Hen after cross-breeding White Rock and Cornish chickens. 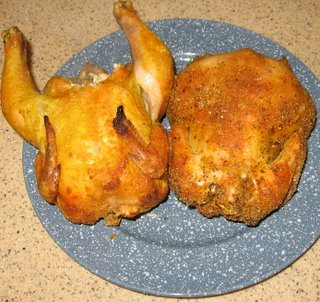 It's interesting that Rock Cornish Game Hens are an actual cross breed. I always assumed that Cornish Hens were just young chickens. It turns out that is partly right, but apparently the "Cornish" really does represent something other than a shrewd marketing method.

Beer Can Chicken Recipe from the Surreal Gourmet on Food Network

Remove neck and giblets from chicken and discard. Rinse chicken inside and out, and pat dry with paper towels. Rub chicken lightly with oil then rub inside and out with salt, pepper and dry rub. Set aside.

Open beer can and empty so can is half full. Place beer can on a solid surface. Grabbing a chicken leg in each hand, plunk the bird cavity over the beer can. Transfer the bird-on-a-can to your grill and place in the center of the grate, balancing the bird on its 2 legs and the can like a tripod. Cook the chicken over medium-high, indirect heat (i.e. no coals or burners on directly under the bird), for approximately 1 1/4 hours or until the internal temperature registers 165 degrees F in the breast area and 180 degrees F in the thigh, or until the thigh juice runs clear when stabbed with a sharp knife. Remove from grill and let rest for 10 minutes before carving.

I used olive oil in place of the vegetable oil and it's worth noting that since the Cornish Hens are closer to 2 pounds than the 4 pounds referenced in the recipe, it will require less rub and other seasonings than specified above. 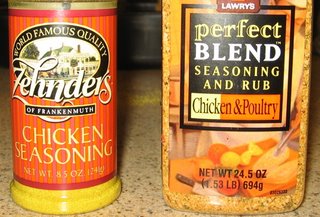 I decided not to use the recipe from Food Network and ended up brushing the birds with olive oil and seasoning with poultry seasoning we had on hand from Zehnder's and from Lawry's (both are very good). I perched the birds on cans of Budweiser Select (1/2 full) and placed them in a 9 x 11 cake pan. 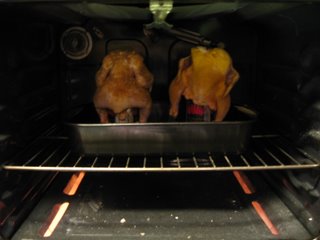 I cheated and cooked these in the oven, rather than the smoker. The birds cooked for 50 minutes at 350 degrees and were removed them when the temperature in the breast was 175 degrees.

We served them up with some buttered corn and cubed slices of pineapple.

Increase Traffic to Your Web Page
Posted by The BBQ Guy at 1:35 PM

I'm pretty seriously considering trying cornish hens in competition next year. I know we can't do worse in chicken than this year!